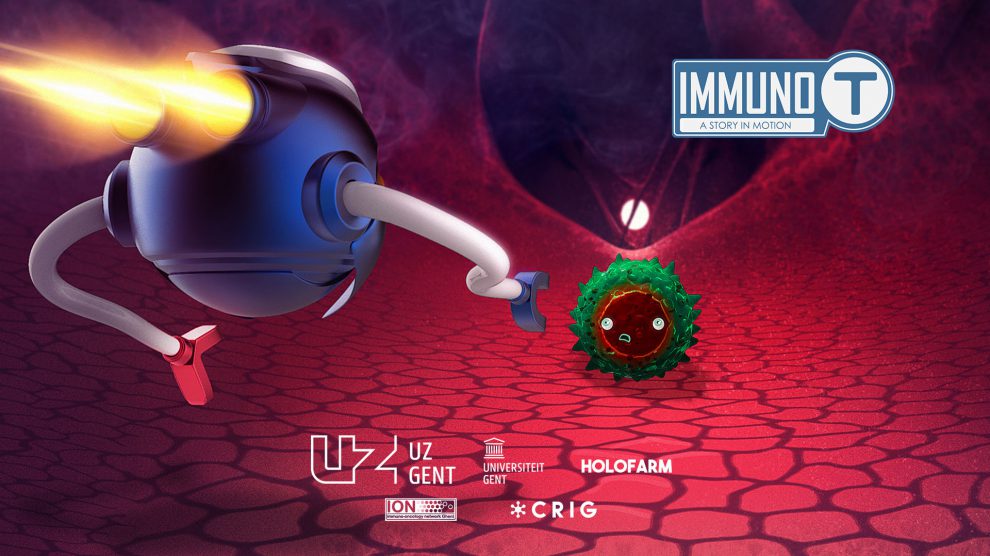 In the beginning of 2017, professor Tessa Kerre came with the idea to develop a game in VR about immunotherapy.

During our first meetings, we questioned ourselves if this was the right medium to tell the story. When communicating such a difficult matter, a person should be able to keep eye-contact with other people.

Perhaps AR would be a fitting medium. It’s also certified ‘fresh’ technology, something the University of Ghent was looking for to showcase during their 200-year festivities.

But during first user tests we had the feeling that the linear flow of gaming – combined with a ‘fun’ level – was missing the goal to easily communicate a very complex topic. That’s why we went looking for a way to translate a story to a mobile screen. We found a lot of inspiration in the article ‘Space into game, time into book‘ by Erik Loyer.

A major aspect of this project was the look development. How do cells look like? And cancer cells? How will the world around them feel like? We first started the process with finding references.

Once we decided that the format would be a motion comic instead of an AR-experience, we experimented with graphic novel styles. The following artwork was delivered by Gert Stevens.

During user tests it was decided to keep in line of the original concept. The graphic novel style had a lot of production value, but a part of the audience preferred a softer visual style which would be digestible for all audiences.

Eventually, we started storyboarding with those characters.

When the storyboard was approved, we rendered the different elements and composed them to one image.